report on the lost city of Angkor wat

The lost city of Angkor Wat 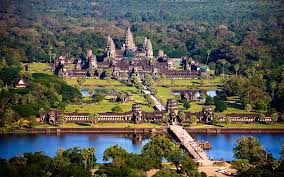 Angkor wat is one of the ancient civilisations in the world but was yet to be discovered by the world. In Cambodia there lied a lost city ‘Angkor wat’. ‘Angkor’ means city and ‘wat’ means temple, which can be translated as ‘temple city’ or ‘capital temple’.
In April 1858 a french explorer named Henri Mouhot, he traveled from London to South east Asia. For the next three years he had explored all of southeast Asia and had discovered many insects in exoitic jungles. Today no one would know who he was if it wasn’t for his journal, that was published in 1863 and was found after he had died two years in Laos. From a fever at the age of  35.
Many years after Mouhots death many other Archeologists came to Angkor. They had revealed that Angkor wat was built in 1150 and is four times larger than Vatican city but was still unheard of back in the 1860s.
Archeologist discovered many thing when they explored inside the ancient city.Detailed carvings of people in traditional clothing scattered the walls of the once so great city. Cambodia Was once a large country that was less than half the size of California and twice the size of Scotland. Angkor was once the capital of the Khmer kingdom, that was famous for it’s 12th century temples.
unfortunately it struggled during the war during the war with Thailand leading to losing some of its land to Thailand. Even today there are still many landmines scattered near the ancients temple that is overgrown with vegetation and are still being looked for.
On the 9th of November 1953, Cambodia was officially declared a country after it’s independence from france five months earlier. After that Angkor wat opened to the public, from national to international. Recently the Koreans, Japanese, Chinese, Americans and other Asian and European countries came into Cambodia to help give Cambodia a modern look but still keep with tradition at the same time.


After roughly 1,200 years of history this Ancient city is no longer lost but there are still many secrets to discover.